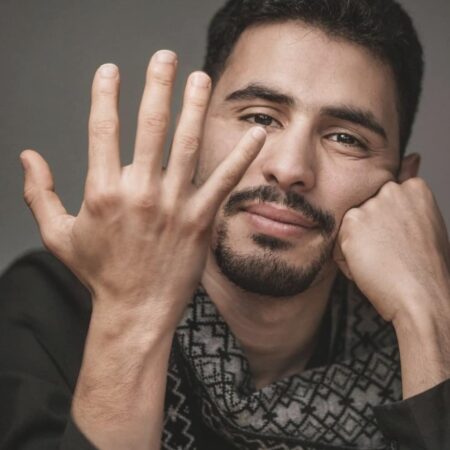 Aeham Ahmad – born in Damascus in the year 1988 – belongs to the Palestinian minority in Syria and lived with his family until 2015 in the refugee camp Yarmouk, to where in 1948 his grandfather fled from Palestine. His musical talent was supported from early years, at the age of five his father taught him to play the piano. At the age of 23 he graduated from the conservatorium in Damascus and Homs. As of summer, 2013, Yarmouk was completely cordoned off, and more than 100 people died of starvation. Aeham responded by playing in the ruins to protest hunger and give hope to the people in his neighbourhood. In 2015, a photograph of him playing in Yamruk journeyed around the world, coining him the “pianist in the rubble”. April that same year ISIS took control of the neighbourhood, and Aeham’s piano burned before his eyes. All he had was to flee and begin the perilous journey many of the region’s refugees know all too well. He arrived in Munich in September 2015, after crossing Turkey and Greece. A year later, his wife and two young sons were able to come to Germany. Today the family lives in Wiesbaden. Since arriving in Germany, Aeham has given countless concerts in Berlin and Bonn, Cologne and Stuttgart, Milan and Paris, giving a musical face to the Syrian Civil War.