ISPI MED This Week | US and Egypt: Between Regional Cooperation and Human Rights

The MED This Week newsletter provides expert analysis and informed insights on the most significant developments in the MENA region, bringing together unique opinions on the topic and reliable foresight on future scenarios. Today, we focus on the United States and Egypt, whose delegates have recently met in Washington for their first Strategic Dialogue since 2015, reaffirming the lasting cooperation between the two actors and the strategic mediator role Cairo is playing in many of the region’s open issues.

On November 8th and 9th, the US Secretary of State, Antony J. Blinken, welcomed his Egyptian counterpart Sameh Shoukry in Washington for the latest Strategic Dialogue between the United States and Egypt. During the summit, the two delegations discussed several issues, ranging from diplomatic cooperation to their bilateral economic relations. For decades, Egypt has represented a linchpin of Washington’s Middle East policy due to Cairo’s influence in the Arab world, its control over the Suez Canal, and its land border with the Gaza Strip. Last week, the Strategic Dialogue confirmed the crucial role Cairo plays in the region. For instance, it was instrumental in achieving the ceasefire between Israel and Hamas in May. Egypt’s renewed involvement in the Israel-Palestine conflict is also exemplified by the summits the Egyptian President Abdel Fattah el-Sisi hosted in recent months with the Palestinian president Mahmoud Abbas, the Jordanian King Abdullah II, and the Israeli Prime Minister Naftali Bennett. Moreover, Cairo has become a key player in the Eastern Mediterranean and Libya, whose approaching elections bear particular relevance for Egypt, too. During the talks, the US raised concern for the latest developments in Egypt’s southern neighborhood, namely the dispute with Ethiopia over the Grand Ethiopian Renaissance Dam (GERD) and the recent military takeover in Sudan, where the two allies’ strategic interests may not perfectly align. Nonetheless, the cruciality of Egypt’s role in the region did not prevent the two partners from addressing other relevant issues, such as the human rights situation in the country.

Experts from the ISPI MED network react to the process of fine-tuning between Washington and Cairo.

An expected yet meaningful dialogue between Washington and Cairo

“The re-launch of the US-Egypt Strategic Dialogue this November arrived at a critical moment in their relations. Last September, the Biden Administration took a more rigid stance over human rights, imposing new conditions on its security aid to Egypt. After a close partnership with the Trump Administration fostered by al-Sisi, a worrying change might have convinced Egypt to improve its record on this issue. Indeed, in the same month, Egypt launched a debated National Strategy on Human Rights. In October, it decided to end the state of emergency. These are all initiatives welcomed by the US administration, which needed to see some political changes from one of its vital allies in the MENA region. Additionally, Cairo’s recent diplomatic activism in stabilizing the area (such as in Gaza and Libya) re-qualified Egypt as a fundamental partner. At the same time, it needs US economic, military, and political support to regain its historical regional role. Those shared priorities in the future could lead the Biden administration to moderate its attention on the human rights issue and strengthen the key elements that the US-Egyptian liaison has always been based on, including political and military cooperation and economic ties.”

In Washington, leverage came before rights

“The Biden administration purports to “centre” human rights, but with Egypt’s dictatorship, it has sidelined them in order to bolster ties. Rewarding Egypt with a high-level “Strategic Dialogue” is the latest example of Biden’s approach.

The US says it raised human rights at the bilateral confab, but the communique mentions them only in passing, completely blandly, to avoid antagonizing Egypt. The communique’s main thrust is U.S. praise for Egypt and announcements of economic support and a USD $1 billion sale of Apache helicopters – the very equipment used by Egypt’s military in the 2015 incident in the Western Desert that killed and wounded innocent civilians, including an American.

Biden’s team implies that drawing closer to the regime will create ‘leverage’ that the US can use to pry loose very minor human rights concessions. Past US administrations tried this strategy —without success. Dictators respond to toughness, and being tougher with Egypt’s would be more effective. Fears this would jeopardize core national security interests are overblown.”

On the Israeli-Palestinian conflict, “Washington needs Cairo no less than Cairo needs Washington”

“The US-Egypt strategic dialogue held last week proved that Washington needs Cairo no less than Cairo needs Washington, particularly in the context of the Israeli-Palestinian conflict. Egypt is the sole broker between Israel and Hamas, the last buffer against arms smuggling from northern Sinai to the Gaza strip and the possible leading actor to carry out Gaza’s reconstruction process. Moreover, due to its geo-strategic location, political influence, and broad recognition of its leading role in the Middle East and North Africa — including by most of US’ regional allies —Cairo helps Washington in its endeavours to stabilize the region and reduce direct involvement in regional and domestic conflicts.”

The Blue Nile Dam: not an American issue

“Egypt had expected a resolute stance by Washington. However, the Biden administration appears to have not yet elaborated a clear and coherent strategy on the Grand Ethiopian Renaissance Dam (GERD) dispute. So far, President Biden seems reluctant to use his influence over one — or more — of the contenders. China’s position is different. Within international (UN) and regional (AU) organizations, Ethiopia enjoys diplomatic support from China. Beijing needs the power generated by the dam to supply the Chinese-owned Eastern Industry Zone in Dukem, twenty miles away from Addis. Nowadays, the US concerns are all turned to the internal crises of the two other important shareholders of the Nile waters: Ethiopia and Sudan. The White House’s primary goal is to avoid an escalation that could drag the whole Horn of Africa into chaos. The general feeling is that the ongoing developments of the Ethiopian crisis will inevitably have a significant implication for the GERD issue. The success of the ENDF-led coalition would boost Abiy Ahmed’s position of strength, thereby making negotiations between the parties much more complicated. On the other hand, if the Prime Minister were to leave the scene or the conflict were to reach a stalemate, there would be room for the revival of talks among the parties. In case of new rounds of talks, the US would likely follow the EU’s position in promoting financial mechanisms of compensation.” 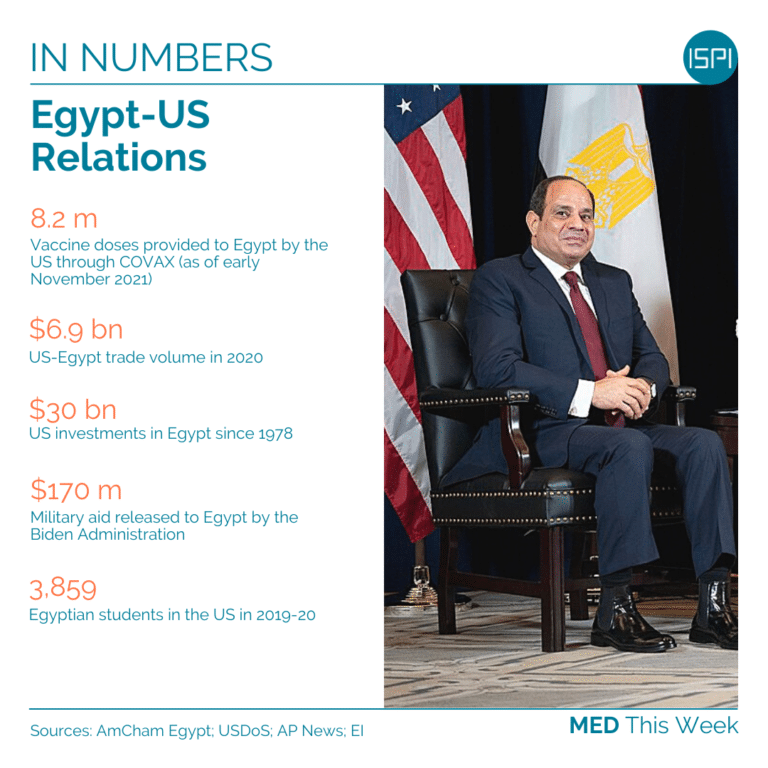