The MED This Week newsletter provides expert analysis and informed insights on the most significant developments in the MENA region, bringing together unique opinions on the topic and reliable foresight on future scenarios. Today, we turn the spotlight on the Middle East and North Africa region’s climate policy shift, with several local actors announcing long-term visions to cut their emissions in the upcoming decades.

Ahead of the ongoing UN Climate Change Conference (COP26) in Glasgow, numerous key regional states such as the United Arab Emirates, Saudi Arabia, and Turkey (the last G20 country to ratify the Paris Agreement) have recently announced their intention to become zero-carbon economies by the middle of the century. This new climate focus, further emphasized by their large delegations in Glasgow, reflects trends that have been underway since the beginning of the year. Just a few months ago, Israel announced its intention to reduce domestic emissions by 85 per cent over the next three decades, while several Gulf and North African countries have similarly further developed their climate targets goals and transition to “clean” energy. Many of them are indeed highly exposed to the impact of climate change, often having to bear the brunt of severe wildfires, drought, and extreme weather events. As such, there are clear signs of climate policy’s shifting centrality on the global stage and some key actors’ willingness in the MENA region to show proactiveness in promoting a clean energy transition. Nevertheless, the enormous challenges that such an accelerated economic diversification programme would require and the lack of clear pathways for said process cast doubts on the potential implementation of these actions, proposed by countries that — by their own admission — cannot simply “turn off the tap”.

Experts from the ISPI MED network react to the pledges made by MENA countries to reduce their carbon footprint. 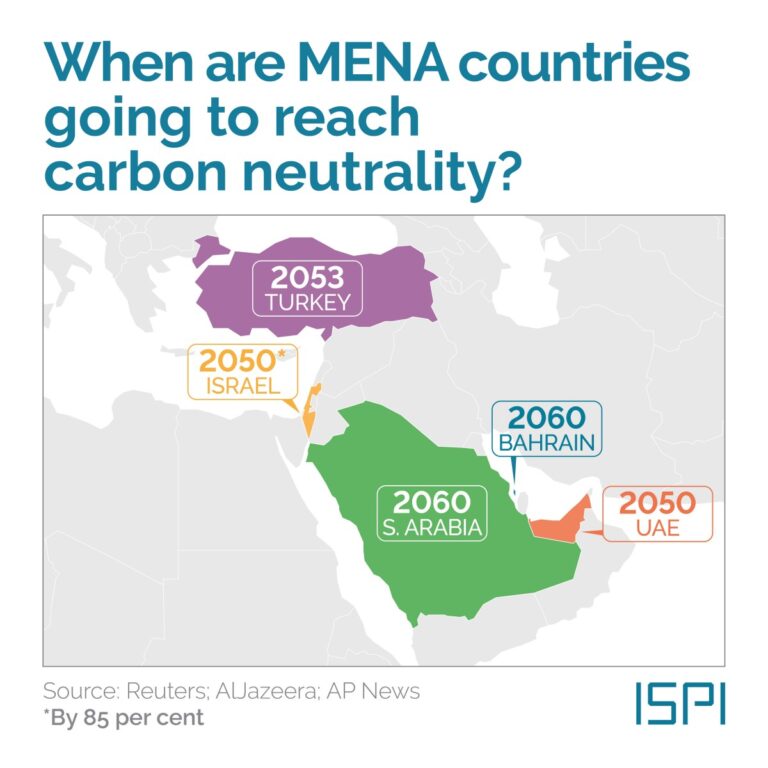 In the (Saudi) fight against climate change, oil and gas must remain “part of the mix”

“Saudi Arabia, the Arab group’s leader at COP26, maintains an ambiguous position on climate. The announcement of net-neutrality by 2060 only refers to domestic emissions and not to the substantially larger volume generated by exported oil, which accounts for 60% of its GDP. The Saudi approach focuses on cutting back the industry’s environmental impact through carbon capture technologies or  nature-based solutions to offset emissions, such as planting 10 billion trees in Saudi Arabia and an additional 40 billion across the MENA region. Phasing out hydrocarbons would only become a concrete option if clean energy – chiefly, green hydrogen – was to become a credible economic alternative to support the national diversification strategy, Vision 2030, creating jobs and revenues. Yet, Saudi Arabia now recognises the political opportunities offered by climate diplomacy, and the Saudi leadership aspires to use the Middle East Green Initiative to emerge as the key regional interlocutor for global players.”

“Turkey’s ratification of the Paris Agreement does not represent a turning point in its commitment to fight climate change. Turkey is in one of the major global climate hotspots and therefore quite vulnerable to different climate hazards. Hence, climate adaptation is always high on Ankara’s agenda.

Nonetheless, being a developing country, climate mitigation for the sake of mitigation has never been — and will not be — that essential for Turkey. As global fossil fuel costs rise, Turkey would likely balance its reliance on coal and natural gas by investing heavily in renewable energy, which is mitigation. 2053 seems to be in the distant future, and it is doubtful that anyone in the government has made a serious calculation about achieving that target. Still, they most probably hope that future technological advancements will make achieving this goal easier.”

“North Africa has experienced the harsh consequences of extreme weather events last summer, with vast wildfires and heatwaves hitting the region. Despite the high reliance on fossil fuels for their domestic consumption, growing domestic energy demand, and the limited penetration of renewables, every country in the region has announced a clean energy transition plan.

In this context, Morocco and Egypt are the most advanced countries in terms of installed solar and wind energies capacity, ambitious targets for their developments, and proactiveness in promoting energy transition. In Morocco, which has the highest percentage of installed electricity capacity from renewable sources, the transition benefits from the Monarchy’s strong political commitment. Egypt, for its part, will host the next UN Conference of Parties on Climate Change in Sharm-El-Sheik in 2022.

Climate diplomacy is an emerging dimension of both countries’ foreign policies. Cairo and Rabat are attracting the attention of the EU, China, and Gulf countries in terms of international development assistance and investments from energy companies. In the future, the extension of interconnections with the northern shore of the Mediterranean and improvements of cross-border networks with neighboring countries could open interesting new scenarios for the region’s economic integration.”

Climate diplomacy could bridge the two shores of the Mediterranean

“Financing sources will need to be tapped. These include the European Fund for Sustainable Development Plus mechanism, a package supplying grants, technical assistance, financial instruments, and budgetary guarantees. Qualifying for the EU Projects of Common Interest allows access to the EU Connecting Europe Facility to finance cross-Mediterranean projects. Strategic projects could promote a Mediterranean market with green electricity exchanges. Europeans should establish partnerships with countries with a green hydrogen strategy, such as Morocco or Egypt, to import green hydrogen and develop local green hydrogen industries. Policy dialogue supplying technical and capacity building will support stakeholders to implement the green agenda, especially for economies heavily reliant on fossil fuels (e.g., Algeria and Libya) or where the green transition is burgeoning (e.g., Tunisia). Cooperation under the European Green Deal should strengthen fragile areas’ resilience by creating local and inclusive employment, reducing poverty, and mitigating migration challenges. Policy dialogue could help address challenges of the EU Carbon Border Adjustment Mechanism towards certain Maghreb exports to the EU.” 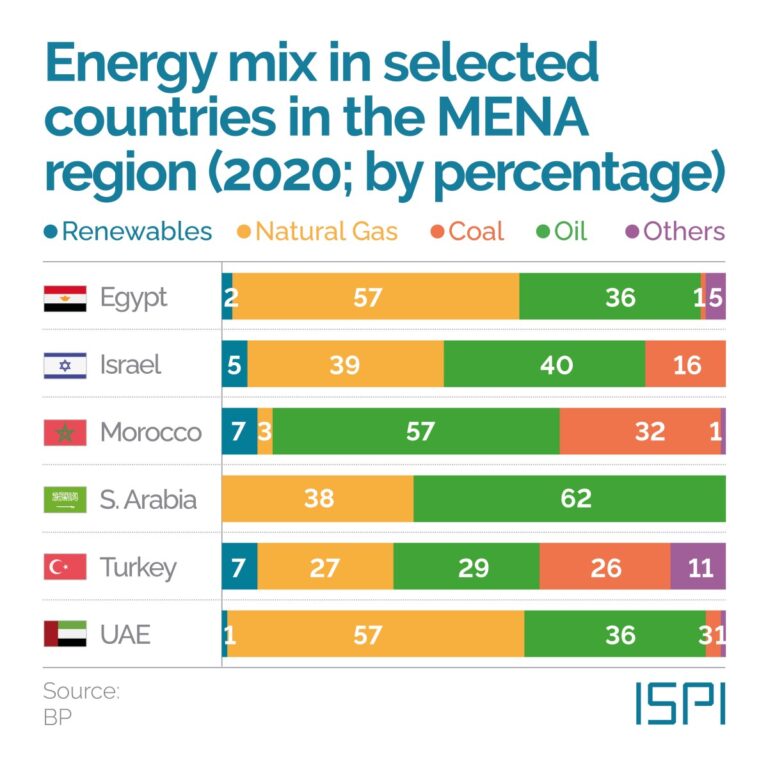