The MED This Week newsletter provides expert analysis and informed comments on the MENA region’s most significant issues and trends. Today, we turn the spotlight on Iraq, where citizens are called to the polls in an early attempt to re-shape a political landscape that has struggled to meet people’s expectations since 2019.

On the 10th of October, Iraqis are called to vote for the fifth parliamentary election since 2005. Initially scheduled for June and later postponed at Iraq’s Independent High Election Commission’s behest (IHEC), this electoral experiment is crucial for the country as it will be the first vote since the widespread protests that erupted in late 2019 demanding reforms and the end of corruption. Above all, the election has been mainly promoted by the Iraqi Prime Minister, Mustafa al-Kadhimi, who has been determined to satisfy protesters’ demands since his appointment last year. Despite Grand Ayatollah Sistani’s recent call for high electoral participation, the turnout is expected to be meagre, especially in light of the several calls for a boycott from key Iraqi political players, such as Muqtada al-Sadr and the Iraqi Communist Party. The same conflicting attitude around the ballots is expected from the so-called Tishreen movement, which is opposed to the political system’s widespread corruption and strongly repressed by security forces and paramilitary groups. Regardless of the election outcome, the new government will face several of Iraq’s never-ending challenges, such as political corruption, youth unemployment, and climate-related fragilities. At the same time, it will have to manage a constantly changing regional outlook, where new diplomatic opportunities may not go hand in hand with the persistent foreign military presence across the country.

Experts from the ISPI MED network react to the upcoming general elections in Iraq. 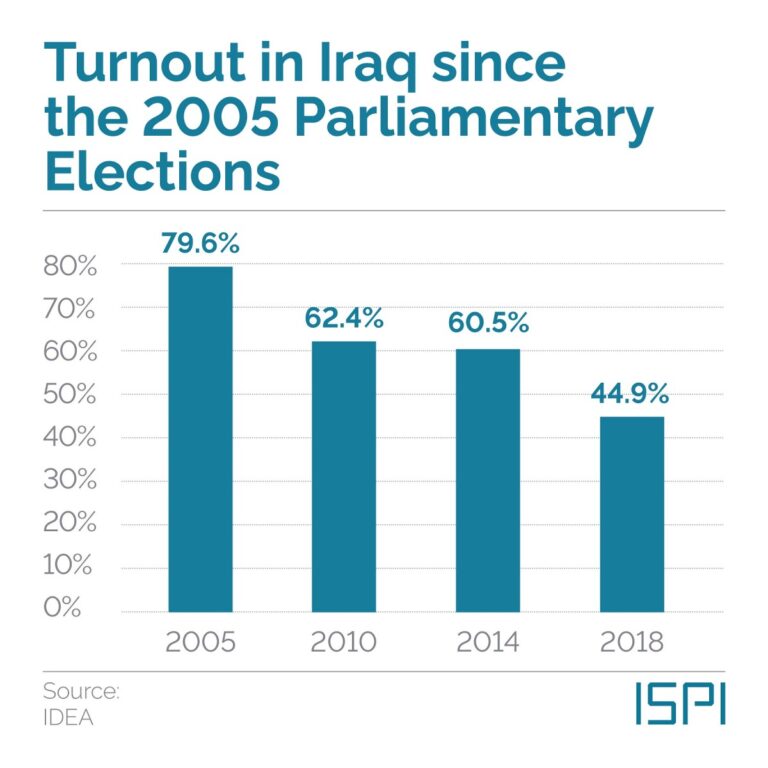 Baghdad should focus on the internal first

“Iraq’s political and security dynamics are unlikely to change after the election. On the micro-level, we may see new faces entering the Parliament, including several independent candidates. However, the big picture will remain the same in terms of the balance of power, sectarian politics, and the key actors who will drive the agenda. That said, Iraq’s diplomatic efforts will depend on who will fill the key government positions and how active they wish to be on the international stage.

Nevertheless, Iraq’s ability to become a player in shaping events or mediating between regional and global powers will remain insignificant. The Iraqi leaders should focus on mediating to solve their country’s internal conflicts, reforming the economic and security sectors, and enhancing the rule of law. A fully functioning Iraq can protect its interests, constructively engage regional powers, and design roadmaps for a more stable neighbourhood. Failing that, Iraq is more likely to remain a victim of rival powers than becoming a credible regional mediator.”

“The most likely post-election scenario is that no single political party wins enough seats to have a parliamentary majority, thereby leading to a coalition government and the selection of a relatively weak Prime Minister. We can expect no drastic change in the political system. Still, the new electoral districts and the participation of five protest-based parties may result in seats gained for reformist candidates without ties to the entrenched parties. Turnout is a critical factor in this election, with many citizens, activists, and protest-based parties (as well as the Iraqi Communist Party) declaring their intention to boycott the elections to delegitimise the next government. Grand Ayatollah Sistani’s statement encouraging citizens to participate will help increase the turnout, particularly among middle-class Shi’a who have expressed apathy towards the election. His statement will also bolster the legitimacy of the process, as will UNAMI’s election-day monitoring. Nevertheless, it is doubtful these measures will set a new course for reform and social trust in the long run.”

The popular movements, looking for a political space

“As long as their demands are not met, Iraq’s popular movements will persist, and protesters will continue to demand a homeland. This might take different forms and shapes, but the calls to end systematic corruption, enforce accountability, and end impunity will continue.

Over the past two years, protesters have had time to organise politically and think strategically. As a result, many entities have emerged and they will have a say in Iraq’s future, whether by participating in the upcoming elections or boycotting them.

Nevertheless, severe threats against activists and those who have been vocal in criticising the political status quo remain a major challenge, negatively impacting protesters’ ability to organise effectively. Furthermore, despite evidence pointing to the perpetrators of attacks against activists, government accountability efforts remain non-existent. This has meant that activists have continued to be systematically targeted, therefore limiting the role and space for Iraq’s popular movements.”

Economic support for popular classes: a priority for the new government

“Public health lockdowns, coupled with the collapse of oil prices last year, exposed the economic vulnerability of millions of Iraqi families whose livelihoods are dependent on an informal sector that offered no protection during the crisis. With the poverty rate on the rise, the next government needs to prioritize economic measures that protect the most vulnerable in society from future shocks. It should consider introducing a universal cash transfer system to bolster the existing social safety net and double-down on efforts to adopt redistributive policies, including taxation and subsidies reform that previous governments have found politically unpalatable. Though obstacles to introducing many of these measures may appear insurmountable, there remains a lot of scope to restructure ineffective government spending and generate enough public support to overcome resistance from those with vested interests. But Iraq’s leaders will need ample courage of their convictions to see beyond the myopia of electoral cycles and set their sights on a far more ambitious and noble endeavour.”

Climate change is an official priority, but little has been done so far

“The outgoing government has recognised climate change as one of the country’s major challenges, but little has been done to mitigate the impact on the ground. In June, President Barham Salih declared climate change a national priority and called on setting up a national plan of action. The new government should build on this and walk the talk: such an agenda would highlight the urgency, bundle investments in different areas, and involve civil society in planning and implementation. As such, climate change would also serve as an ultimate push to deal with pressing challenges that have not been sufficiently addressed yet, such as water supplies, land use practices or disaster risk reduction programmes.”

“In need to secure a parliamentary majority, the future Prime Minister will be more vulnerable to the pressures of Iran-aligned groups and affiliated political forces calling for the departure of Western troops from Iraq. The messy US retreat from Afghanistan proved to many Iraqis that years of international assistance on security sector reform have failed to deliver results, increasing scepticism vis-à-vis NATO and its plans in Iraq. Moreover, the US announcement of the “end of a combat mission” fostered expectations of a decreased US and Western military presence in Iraq.

NATO should adjust its plans for expanding its mission in line with developments on the ground. In the current context, a mission expansion is likely to spark tensions between the government and paramilitaries, jeopardise the prospect of the mission to operate and add instability in an already volatile environment. Italy, which is scheduled to take the lead of the NATO mission in Iraq, has a challenging task ahead. Caution will be critical in the months to come.”

“The upcoming parliamentary elections will be a significant chance for the EU to show the real extent of its commitment in assisting Iraq in its path towards improved domestic stability and economic prosperity. In this context, both elements are strongly related to the implementation of extensive and ambitious socio-political reforms in Baghdad and Erbil, as well as to Brussels’ promotion of dialogue and governance through a clear-cut (yet adaptive) strategy based on diplomacy and reform in Iraq.

Iraq’s profound geostrategic importance for Europe is also mirrored by growing interests of single European states, such as France and Italy, who are at the forefront of the EU’s strategic relationship with Baghdad. This is especially true for Rome, who will lead the NATO Mission in Iraq (NMI) from May 2022. In this context, the chances of their success are strongly related to the incoming election. On the one hand, both countries have established positive ties with al-Kadhimi’s government, under whom Iraq has been transformed into a regional meeting point. On the other hand, al-Kadhimi maintains a tense relationship with the Iranian-aligned parties in the Shiite faction (and their affiliated militant groups), which today represent the most significant challenge to a Western presence in Iraq, whether American or not.” 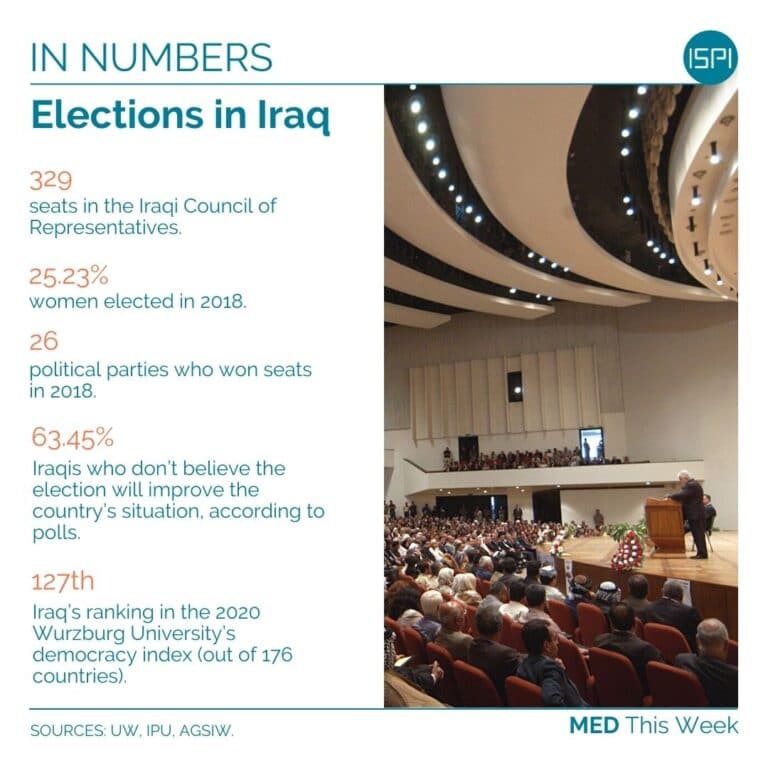