ISPI MED This Week | Libya After Paris: A Fragile Consensus for the Elections

The MED This Week newsletter provides expert analysis and informed insights on the most significant developments in the MENA region, bringing together unique opinions on the topic and reliable foresight on future scenarios. Today, we focus on the Paris Conference on Libya, where representatives of national governments and international institutions with vested interests in the country gathered in support of the implementation of Libya’s transitional process.

On November 12th, under the diplomatic initiative of France, Italy, Germany, and the UN, several regional and international leaders gathered in Paris to attend the conference on Libya. While all the highest offices of Libyan transitional authorities were present, Turkey’s participation with a lower-level representative may suggest that the international consensus around the country’s future may not be as solid as it appears. Nonetheless, the final joint declaration contained several statements on a number of important issues. Besides expressing their unanimous commitment to hold the presidential elections on December 24th, the participants urged the full implementation of the Action Plan for withdrawing mercenaries and foreign forces from the Libyan territory. Given the large presence of international fighters on the ground, the extent to which this call will be implemented remains uncertain. The international community also urged the Libyan authorities and relevant actors to respect and safeguard the integrity and unity of Libyan financial institutions, such as the Libyan Central Bank and the National Oil Corporation (NOC). Finally, a general condemnation of human rights violation underlined the centrality of the debate around the respect of human rights and international law in the Libyan context. Against this backdrop, the results of the Paris conference suggest a growing consensus among European actors. At the same time, some divergences persist as regards other international actors, mainly Russia and Turkey. In this context, such differences could represent a factor of instability ahead of the December elections.

Experts from the ISPI MED network react to the outcome of the Paris international conference for Libya.

“Tensions are high in Tripoli, where political constituencies are at odds over the legal framework for the upcoming presidential and parliamentary elections. On one hand, there are those who support going forward with the polls on the basis of legislation adopted by the House of Representatives and warn that war will break out if the voting day is delayed. These include pro-Haftar and former regime sympathizers, dozens of presidential hopefuls, and a large majority of the population disaffected with Libya’s status quo. On the other hand, there are those who reject these laws claiming they lack consensus and vow to impede the elections from taking place. These include the anti-Haftar and anti-Qadhafi constituencies, including some majors and militia leaders particularly opposed to their former enemies on the battlefield, such as Field Marshall Khalifa Haftar and Saif al-Islam al-Qadhafi, who are allowed to run. Overall, the situation is highly volatile.”

In Cyrenaica, “many knots must (still) be solved”

“In Cyrenaica, the electoral process is taking place quietly: the ballot papers have been distributed, and the machine used to secure the polling stations is positioning itself. The people of Cyrenaica are showing great enthusiasm. There have been queues, for example, in front of the political headquarters of Haftar’s party, “Karama”, to give the field marshal the 5,000 popular votes necessary to run for presidential elections. However, many knots must be solved. First of all, those linked to the presidential and parliamentary electoral dynamics, which at the moment see East and West in stark contrast. In this context, an astute puppeteer is the House of Representatives (HoR) Speaker, Aguila Saleh, who moves in the maze of Libyan politics with great skill. He too intends to run for the presidential elections, as does one of Gaddafi’s sons, Saif al-Islam, who has filed his candidacy in Sebha, a city in Fezzan that has always been loyal to his family.”

Reintegrating militias: the hardest challenge for a new Libya

“Libya’s current political and security situation is not conducive to designing a large-scale and holistic Security Sector Reform (SSR) effort right away. While many policymakers have opted to put SSR on the backburner until elections occur, it is important to note that the suffrage is unlikely to pave the way for a resolution of the dilemmas faced in Libya’s hybridized security sector – and elections, in fact, more likely to exacerbate these challenges. A process for overhauling security sector governance in Libya can only begin when the foundations for long-term SSR, disarmament, disengagement, reintegration, and transitional justice are centred as part of the Libyan state’s agenda and, more importantly, made part and parcel of international stakeholders’ foreign policy priorities. Such an approach would require tailoring the overly traditional doctrines of SSR to the Libyan context while avoiding the pitfalls of foreign-sponsored train-and-equip programs or visionless piecemeal efforts.”

“The conference in Paris is not the first time the French presidency attempts to position itself as a key mediator in the Libyan conflict, as exemplified by the Celle-Saint-Cloud meeting between Haftar and Seraj in May 2017, followed in 2018 by another conference gathering the heads of Libya’s divided institutions in Paris. Each time, Macron’s entourage have tried to bypass a weak or inefficient UN and impose their vision of conflict resolution: no more “never-ending discussions” between multiple factions, but a strong arbitrator capable of cutting deals between the top war leaders, and rapid elections to eventually resolve the dispute according to the people’s will. Each time this vision brought nothing but more conflict. Over the past years, France seems to have considered that encouraging competition – electoral, and at times military) was the easiest and fastest way to end the conflict. After the latest Paris conference, unfortunately, they are very likely to be proven wrong again.”

With Kamala, Washington sent its message in Paris (and beyond)

“The Paris conference on Libya did not delude the many experts and observers who predicted its failure in devising a mechanism to help solve the Libyan crises, possibly by ensuring the regular and effective holding of elections on December 24th. The declarations issued by most of the participating states stressing the unity and determination of their support for the Tripoli-based Government of National Unity led by Prime Minister Abdelhamid Dbeiba were largely expected and deemed practically useless. Nevertheless, among all statements and declarations, one fact stood up: the relentless, forceful, and unambiguous position of the United States who sent their Vice-President Kamala Harris. The signal could not have been stronger. This is in perfect agreement with the univocal positions most relevant administration top officials expressed in the last few months. The American Administration is seriously engaged in Libya and has in the holding of free and fair Presidential and Parliamentary elections its leading position. The idea is that only a legitimate Libyan government can obtain the necessary international support to evict Russian and Turkish forces from the country. To reach this objective, which the USA considers a priority, the Biden Administration is exercising all efforts. This engagement is perhaps the most positive aspect of the Paris conference.”

“Turkey was represented in the Paris conference on Libya by a relatively lower-level representative, deputy Foreign Minister Sedat Onal. Several concerns will shape Turkey’s policy towards Libya in the future, particularly around the upcoming elections, which Ankara is not particularly keen on taking place on time. First, the election bears some uncertainty for Turkey at this stage, especially because of the multiplicity of candidates from Western Libya and the potential fragmentation that it could produce among Ankara’s allies. Second, the longer the Libyan crisis protracts into a political phase, the more difficult it will be for Turkey to maintain its partners’ loyalty. In the new period, Turkey’s influence in this country might gradually and relatively wane. Third, Ankara is concerned about the possible cancellation of the deals it signed with Tripoli, and especially the maritime demarcation agreement. Fourth, as the political roadmap advances, the pressure on Turkey and other actors to withdraw foreign forces and mercenaries will grow. For Ankara, the troops still represent a valuable bargaining chip. Lastly, Turkey has come to believe France wants to include the Libyan crisis within the broader Eastern Mediterranean crisis. Although Ankara also considers them as connected, it still wants them to be discussed as two separate topics.”

The Kremlin still keeps its trump cards on the Libyan board

“Since its inauguration in March, Russia has officially supported the Government of National Unity and called for Libya’s elections to be held as scheduled in December. Despite these pledges, the Wagner Group has maintained a private military contractor presence in Libya and reportedly expanded its recruitment of Syrians into the conflict theatre. This split-screen policy suggests Russia is still willing to violate Libya’s sovereignty and could engage in political interference during the elections. These political interference efforts will likely be driven by Yevgeny Prigozhin and his allies within the Russian Ministry of Defence but are also shaped by the Kremlin’s reconstruction ambitions. The entry of Khalifa Haftar and Saif al-Islam Gaddafi, who have close ties with Moscow, as candidates amplifies this risk. Turkey’s retention of mercenaries in Libya could result in a post-election Russia-Turkey proxy conflict in the Northern African country.” 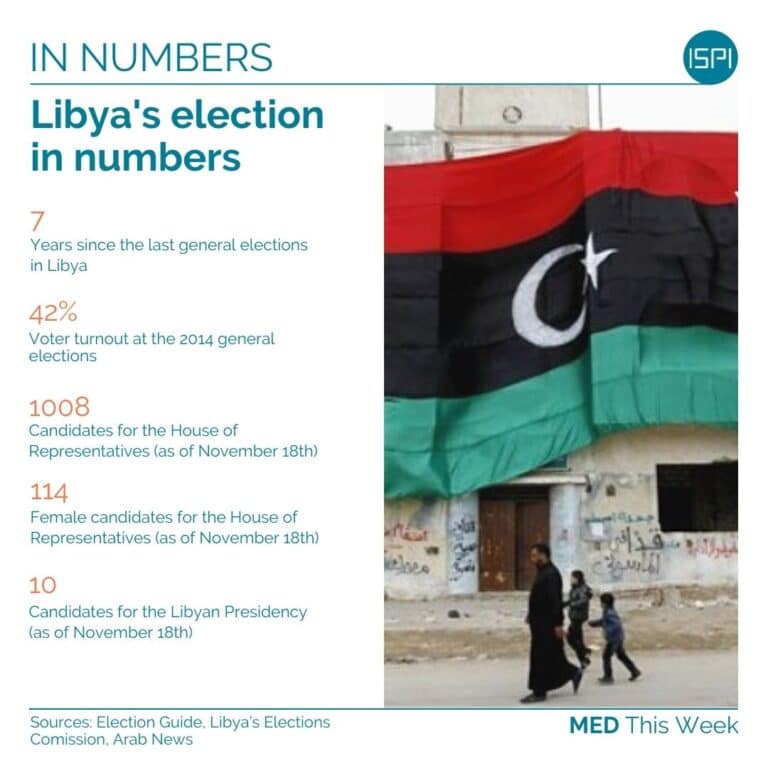