ISPI MED This Week | Lebanon: Adding Fuel to the Fire

The Rome MED This Week newsletter provides expert analysis and informed comments on the MENA region’s most significant issues and trends. Today, we turn the spotlight on Lebanon, whose citizens have long demanded accountability for years of endemic corruption, mismanagement, and dysfunctional politics.

The violence that unfolded in the streets of Beirut on October 14th was the latest episode in Lebanon’s political and socio-economic crisis. While the dynamics of the incident are still unclear, its larger context is the quest for political accountability in Lebanon. As such, these clashes are the culmination of tensions that have been simmering for months. The investigation into the 2020 Beirut port blast became even more contentious as the lead investigator, Judge Tarek Bitar, issued arrest warrants for two former ministers and current MPs. Last week, as Bitar summoned two additional ex-ministers for questioning, the investigation was temporarily suspended. Hezbollah reiterated its call for the removal of the judge, accusing him of politicizing the case. The dispute over the inquiry comes at a difficult moment for the country between a plummeting economy, an ongoing energy crisis and enduring shortages of fuel, medicines and other essential goods. The clashes in Beirut leave the recently established Miqati government with few political options. While ministers close to Hezbollah threaten to resign if the judge is not removed, political interference in the investigation would represent a severe blow to the rule of law in the Lebanese political system.

Experts from the ISPI MED network react to the escalation of violence that took place in Beirut over the investigation into the 2020 port explosion.

The deep significance of the investigation

“The absence of a clear-cut separation of powers between the judiciary and the Lebanese political establishment is at the heart of the investigation’s current impotency. Lebanon is notorious for political interferences in the working of its judiciary system, and the country is once again witnessing intense pressures by its political class to sabotage or derail an investigation that seems increasingly likely to implicate many senior political and security officials. These pressures are part of a broader trend whereby Lebanese politicians leverage sectarian identities and threats of civil war to short circuit attempts at finding the truth and prosecuting criminals, many of whom either belong to that political class or are somehow associated with it. A failure of this investigation to get to the bottom of how the ammonium nitrate entered the port of Beirut and to find out who failed to act upon it for more than six years, as well as what eventually triggered the explosion would signal to the political establishment that nothing is off-limits, that the judiciary is completely overpowered or silenceable, and that the most horrific and damaging crimes can effectively go unpunished.”

The reason behind Hezbollah’s legitimacy crisis

“Hezbollah is undergoing a crisis of legitimacy, which goes hand in hand with that of the Lebanese political system. This is because Hezbollah, once an outsider and opponent of the sectarian system, has now become its major pillar and beneficiary. Ironically, Hezbollah now defends a system that its enemies created to limit its power.

Even though Hezbollah enjoys a high degree of autonomy from the Lebanese state, it has failed to offer an institutional alternative to it. This has become clear in its management of the fuel crisis by bringing oil tankers to Lebanon from Iran. Hezbollah can compensate for the weakness of the Lebanese state by relying on its own international network, in open defiance to the West, which is imposing sanctions on Lebanon. But this is a contingent, not a structural solution. It may irritate the US and its allies in Lebanon. Still, it does not disrupt the predatory capitalist system that thrives on Lebanon’s sectarian institutions –the root cause of instability in the country.”

“Lebanon’s unfolding socio-economic crisis is worsening by the day because of nearly two-year-long policy inaction, obstruction of a financial rescue plan, talks with the IMF since July 2020, and socialization of the $80+ billion dollars of losses in the financial sector by pushing the burden onto society through the vicious circle of devaluation and hyperinflation. The failure to deal with the fallout following the Beirut port blast which destroyed a large part of the capital and affected major businesses and public services, has aggravated the crisis.

The lack of willingness to undertake any reform – and the ensuing depletion of foreign currency liquidity – led to the collapse of basic public services including access to health, education and severe electricity blackout. Thus, Lebanon is witnessing a broad-based impoverishment of the population, with a sustained rise in the share of the population under the $5.5 international poverty line, soaring unemployment and massive exodus of human capital, the backbone and essential ingredient for Lebanon’s future recovery.”

“Lebanon has been resorting to quick fixes in its power sector for three decades, mostly due to vested interests. Yet, 18-months after the country’s default, maintaining the status quo remains the dominant policy. The gas and electricity agreements with Egypt and Jordan are a continuation of these quick fixes. On the one hand, they are needed to keep critical power on. On the other hand, they feed the government’s unwillingness to reform. The key challenge lies in Lebanon’s inability to finance any initiative in the absence of a financial package. Additionally, weak governance and political meddling are subjecting the sector to geopolitical clashes. There is no light at the end of the tunnel without the Lebanese government endorsement of better sectoral governance and a sustainable solution. Until then, the Lebanese will face increasing outages and political interference in a sector that should be at the core of the economic recovery.”

Lebanon’s political leadership, the Pandora Papers and the IMF

“The Pandora Papers constitute just another episode in the long-running saga of elite capture and control in Lebanon. That’s because the contents of the papers do not run counter the average Lebanese’s conception of their current (or past) political leadership—shrewd, often wealthy and able to twist and turn the rules of the game to their advantage. Indeed, the Lebanese are currently suffering a blatantly illegal twist of those same rules. As far as the IMF is concerned, the institution is well aware of how Lebanon’s financial and economic regulatory regime facilitates antiquated banking secrecy laws, offshoring, conflicts of interest, and weak tax collection capacity. If the IMF is serious about financial reform in Lebanon, they may use the papers as an example of what a future deal must counter. If they are not, Lebanon is in for a Washington Consensus-type deal or no deal at all, both of which would spell disaster for the now-impoverished country and its failing state.”

Looking into the regional implications of Lebanon’s crisis

“The 15 years-long civil war in Lebanon, finished in 1990, hardly influenced the geopolitics of the Middle East. Rather, it largely reflected a regional crisis: namely the Arab-Israeli conflict. The same would be today in the event of a new, prolonged, inter-sectarian confrontation. Every party in Lebanon has a foreign protector, though none – except Iran – would be willing to be involved in a new crisis. The other main actor deeply concerned about Lebanon’s economic, social, and security collapse is Israel. Its extreme scenario would be a total takeover by Hezbollah, but that seems unrealistic: in many ways, Lebanon has already been absorbed into the Iranian sphere of influence. It is true that an essential part of the political system and civil society are Western-oriented, and Hezbollah does not hold a complete monopoly of power. However, any Lebanese government would never act against Hezbollah’s regional agenda, which is one dictated by Iran.” 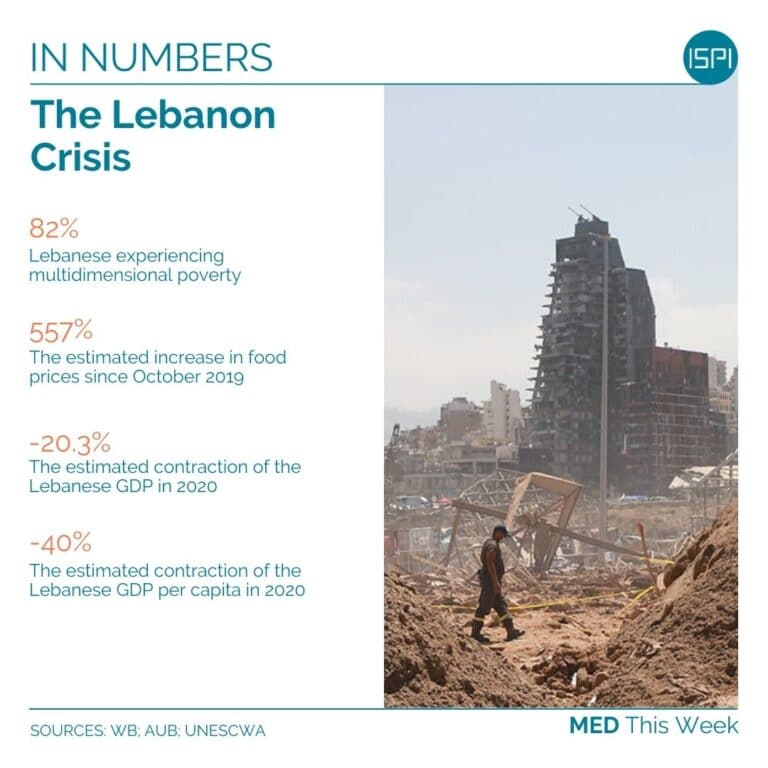