ISPI MED This Week | Assad in Syria: Here to Stay?

The MED This Week newsletter provides expert analysis and informed insights on the most significant developments in the MENA region, bringing together unique opinions on the topic and reliable foresight on future scenarios. Today, we focus on Syria, recently at the core of a renewed interest by neighbouring Arab states, willing to re-establish diplomatic ties with the Assad regime. These developments came when the latest negotiations for a new Syrian constitution failed to deliver tangible results, raising questions around the country’s future shape and the tenure of the current government in Damascus.

On October 18th, delegates from all sides met in Geneva as part of the sixth round of the Syrian Constitutional Committee talks. Closing nine months of negotiations by the UN Special Envoy to reach a consensus on constitutional reform was considered a relevant breakthrough for drafting constitutional principles. Nonetheless, in four days, the conference did not make any meaningful progress, failing to reach a shared understanding of how to move the process forward. The failure of the constitutional process so far adds to Syria’s other longstanding issues. The country remains fractured, and while the government controls most of the national territory, a political solution to the conflict seems out of reach. Millions of Syrian refugees are still scattered across the region and worldwide, and the country faces the daunting economic consequences of a decade of war. How these structural problems will be solved in the future is difficult to forecast. The October 20th attack that took place in Damascus exemplifies the political and security challenges that lie ahead. Meanwhile, Syria’s Arab neighbours have started to engage with Assad, with Jordan and the United Arab Emirates in the lead. While the economic significance of these diplomatic steps has been limited thus far, they certainly give a political boost to the Syrian government. Though they do not constitute a violation of the Caesar Act, they are evidence of the shortfalls of the current US policy in Syria, which today lags behind events on the ground.

Experts from the ISPI MED network react to the latest events in Syria.

“Throughout the years of the Syrian civil war, Bashar al-Assad ‘s regime has shown to be remarkably immune to compromise. The recent failure of the sixth iteration of the constitution redrafting process only serves to underline that the Syrian regime is unwilling to make any political concessions, lest one lead to more.

At best, the constitutional process is a waste of time and money. At worst, the forum allows the regime to show up and act as if it’s working in good faith to come up with a political solution to the conflict while at the same time trying to ingratiate – and legitimate itself with – the international community.

The constitutional committee’s focus on national sovereignty, counterterrorism and the rule of law is a distraction from the basic rights and freedoms millions of Syrians have demanded over the last ten years. Syria may need a new constitution at some point; however, before this, it needs an end to the police state and the impunity of the Assad regime. Even the most eloquently worded constitution will fail without an inclusive, elected and representative government.

At this juncture, the international committee would be better served to support the Syrian diaspora community – through increasing resettlement numbers, support for civil society organisations, transitional justice and accountability initiatives.”

Assad “can do a lot with a bayonet, but he can’t sit on it”

“President Bashar al-Assad looks likely to stay in power for the foreseeable future. The rebels can’t topple him, even if they hold some territory. While al-Assad may never be able to put Syria back together again, that won’t prevent him from ruling most of it.

On its own, the October 20th attack doesn’t say much about the security situation. In a country at war, a one-off bombing isn’t evidence of shaky state control. If anything, the fact that such incidents are so rare suggests that Damascus is pretty well secured. But Assad’s Syria will remain an unhappy, violent place. It is crawling with militias and the economy is in shambles. It will keep the President busy. As Talleyrand put it, you can do a lot with a bayonet, but you can’t sit on it.”

Syria is not a safe place to return

“The Syrian regime has killed hundreds of thousands of Syrians and continues to do so on a daily basis. It continues to detain and torture tens of thousands of innocent people, with arbitrary arrests, enforced disappearance, and extortion becoming a part of daily routine. Normalizing such a regime would have disastrous consequences, not only for Syrians but beyond, as it would lead to new waves of displacement and instability. It is impossible to talk about return as long as tens of thousands of detainees in Assad prisons. The only possible conversation about a safe, voluntary and dignified return is one that comes after a safe environment is defined by the Syrians themselves and is established in the whole of Syria, under robust international guarantees.”

Arab neighbours are now pushing for a realistic, pragmatic approach with Damascus

“Jordan’s push to normalise relations with Damascus confirms that most Arab countries now consider the current status quo as an obstacle to their geopolitical and economic stakes. For Damascus, this can be another step in the pursuit of regaining international legitimacy. For Jordan, normalising relations with Damascus can help relieve its beleaguered economy, going on to discuss all common issues. In this spirit, the energy agreement between Egypt, Jordan, and Iraq can be considered the first tradeoff in this new phase of pragmatism and revisionism. Amman regains a role in regional politics and contributes, with Cairo and Baghdad, to the stabilisation of Lebanon, with an eye to counterbalancing Iran and Hezbollah. Syria ideally changes its place around the Arab table from that of an issue to that of the facilitators and aiders in relieving an alarming crisis in today’s Middle East.”

“Israel’s strategy in Syria is geared towards limiting Iran’s military presence there and distancing Hezbollah from the border. The strategy, which also seeks to prevent spillover of the situation in Syria into Israel, enjoys broad political support domestically and was not significantly impacted by the change of government. According to the Mitvim Institute polls, Russia is perceived – year after year, and also in 2021 – as the second most important country for Israel in the world, following the US. Therefore, Israelis were attaching significance to Bennett’s first meeting with Putin. It was another milestone in the consolidation of Bennett’s image as capable of advancing Israel’s interests on the global stage. The meeting was presented as a success – both in terms of its length and the type of discussion that took place. It was a chance for the leaders to get acquainted with each other, discuss coordination between Israel and Russia regarding Israel’s actions in Syria, and exchange views on Iran. Unlike the Netanyahu era, during which Israel’s foreign policy became the Prime Minister’s personal endeavour, the current government has a robust foreign minister (Lapid) and an empowered Foreign Ministry at its service. This will also have a positive impact on the conduct of Israel-Russia relations and on Israel’s ability to advance its strategic goals in Syria.”

The US dilemmas of withdrawing from Syria

“The sustainability of the US presence in Syria comes down to the Biden administration’s willingness to remain in the country. Lessons drawn from Afghanistan would suggest that neither Syria nor the fight against IS in the area is in the vital interests of the US, and attacks such as those on the Al-Tanf military base might sharpen minds in the White House on effecting a withdrawal. However, it would be short-sighted to do so, as it would not only amount to an abandonment of an allied force, but it would also cede unnecessarily ground, both literally and politically, to Russia and Iran. It would indeed embolden Iran and, by doing so, strengthen its hand in the JCPOA negotiations. Therefore, sustaining a presence in Syria serves broader US interests and makes it a critical policy tool.”

“Firstly, what’s occurred thus far in terms of regional re-engagement has mainly been symbolic – politically significant, but of almost zero economic consequence for Syria. While that remains the case, the Biden administration is unlikely to perceive any need to intervene. Beyond countering ISIS and providing humanitarian aid, Syria hasn’t registered as a policy priority. For now, kicking the can down the road is likely to continue. While the administration will continue to align itself with the UN Security Council Resolution 2254 publicly, it appears happy to delegate broader elements of its Syria policy to the region. For Biden, seeing Jordan facilitate transnational energy deals that transit through Syria and benefit Lebanon has no direct negative bearing on immediate U.S. interests. If we see an especially flagrant violation of the Caesar Act, Congress will be up in arms, but we’re not there yet. To me, this is a worrying, myopic, and short-term approach to a complex, intractable issue like Syria – it seems we’re yet to learn the lessons of the recent past.” 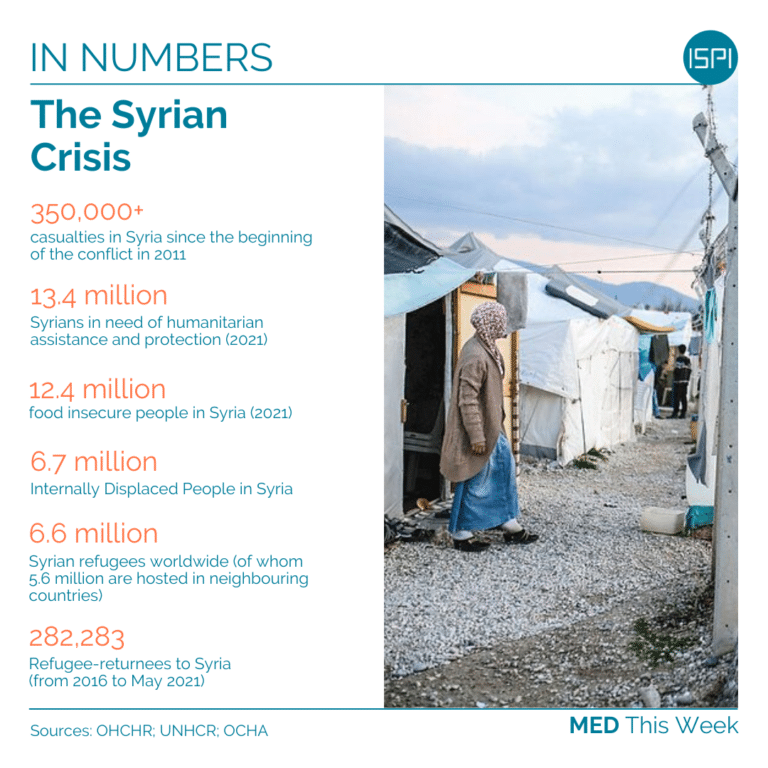